Women Are The Leaders of Tomorrow #ShePower

S.H.E believes in women and the power of their voice. There is an active female empowerment movement; one that is undeniable and one that will not be silenced. Women more than ever are leaders in the fields of medicine, law enforcement, science, and business. I wouldn’t have been able to start S.H.E if I didn’t believe in my capabilities as a woman. I want to thank every one of you who participated in the #ShePower movement. 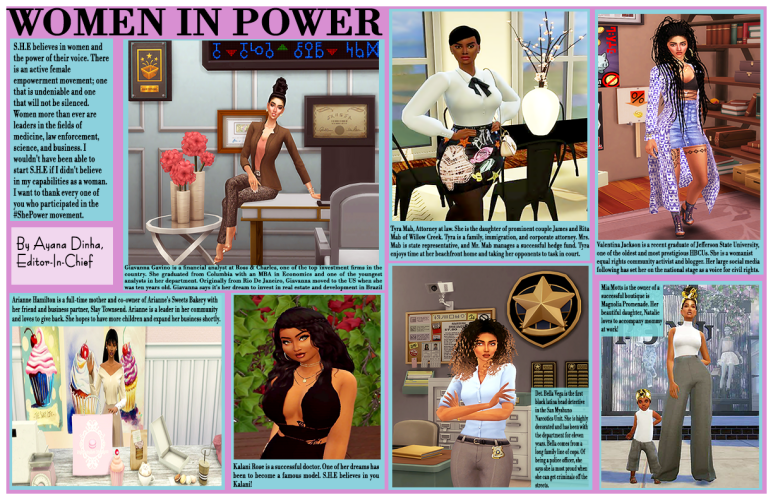 Giavanna Gavino is a financial analyst at Ross & Charles, one of the top investment firms in the country. She graduated from Columbia with an MBA in Economics and one of the youngest analysts in her department. Originally from Rio De Janeiro, Giavanna moved to the US when she was ten years old. Giavanna says it’s her dream to invest in real estate and development in Brazil within five years.

Arianne Hamilton is a full-time mother and co-owner of Arianne’s Sweets Bakery with her friend and business partner, Slay Townsend. Arianne is a leader in her community and loves to give back. She hopes to have more children and expand her business shortly.

Kalani Rose is a successful doctor. One of her dreams has been to become a successful model. S.H.E believes in you Kalani!

Tyra Mab, Attorney at law.
She is the daughter of prominent couple James and Rita Mab of Willow Creek. Tyra is a family, immigration, and corporate attorney.
Mrs. Mab is state representative, and Mr. Mab manages a successful hedge fund. Tyra enjoys time at her beachfront home and taking her opponents to task in court.

Valentina Jackson is a recent graduate of Jefferson State University, one of the oldest and most prestigious HBCUs. She is a womanist, equal rights community activist and blogger. Her large social media following has set her on the national stage for civil rights.

Det. Bella Vega is the first black latina head detective in the San Myshuno Narcotics Unit. She is highly decorated and has been with the department for eleven years. Bella comes from a long family line of cops. Of being a police officer, she says she is most proud when she can get criminals off the streets.

Mia Moss is the owner of a successful boutique in Magnolia Promenade. Her beautiful daughter, Natalie loves to accompany mommy to work!

Thank you to the following people who participated in the S.H.E Power feature:

Giavanna Gavino, Valentina Jackson, and Bella Vega are all Sims by me and new characters in my upcoming story, Reign: A Game of Power.